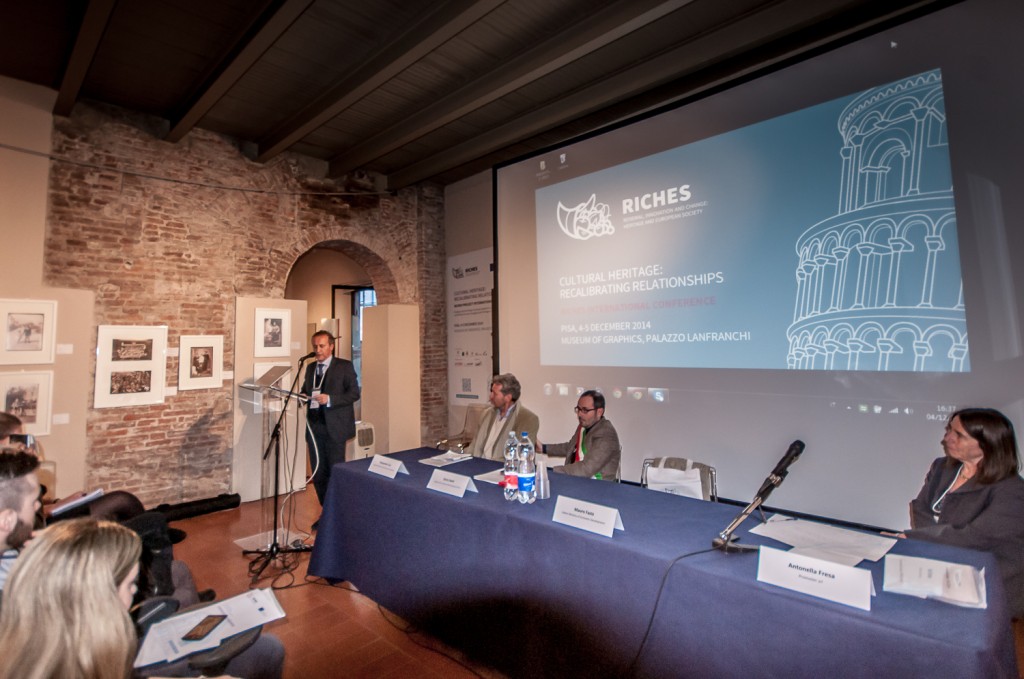 The first international conference of RICHES project took place in Pisa on 4-5 December 2014. The whole event was organized by partner Promoter in the aristocratic venue of Palazzo Lanfranchi, a patrician palace on the riverbanks of Arno river, that hosts the collection of the Museum of Graphics of the city.

Riches and Civic Epistemologies projects have recently signed a Memorandum of Understanding to join their activities and to facilitate the collaboration between them in order to improve the overall results and expected impacts of such actions. As first result of this cooperation, Civic Epistemologies project has been appointed as Associate partners and has been invited to join the International Conference.

The conference opened in the afternoon of 4th December, when the about 100 attendees, after the registration and a nice welcome coffee, took seat in the large room of the second floor, fully dedicated to the conference. Welcome speeches of Antonella Fresa from Promoter, Dario Danti Chancellor of Culture in representation of Pisa municipality, Alessandro Tosi scientific director of the Museum of Graphics and Mauro Fazio from the Italian Ministry of Economic Development introduced the day.

Then there were speeches by two other associate partners of Riches project: Francesca Lanz from Politecnico di Milano about MeLa Project, on the topic of European Museums in an age of migrations; and José María MartÍn Civantos, from Universidad de Granada about MEMOLA Project, Mediterranean Mountainous Landscapes.

Finally, Neil Forbes, the Riches Project Coordinator, spoke about the vision, the research areas and the outcomes of RICHES project. Neil is also the Coventry University representative in Civic Epistemologies.

The evening was concluded with cultural activities: a guided tour to the exhibition of Tullio Pericoli, renowned Italian painter and illustrator, on show in the first floor of the Museum of Graphics, and a visit of the crowdsourced photographic exhibition of the All Our Yesterdays series, showing digitized images of vintage photographs collected among the citizens of Pisa during the Europeana Photography main exhibition All Our Yesterdays (1839-1939) Scene di vita in Europa attraverso gli occhi dei primi fotografi (11 April – 2 June 2014).

On the second day, the conference began with the launch of the Civic Epistemologies online Questionnaire on Cultural Heritage Institutions and Citizen Science that Antonella Fresa announced to the audience. A special leaftlet has been distributed to all the attendances to invite all of them to contribute. This questionnaire is part of the research done within the Civic Epistemologies project. It will help to develop a roadmap for citizen science related to cultural heritage.

After that, Neil Forbes took again the microphone for the first keynote speech entitled “Assessing value in cultural heritage”.

Although not present on site, the third keynote speaker of the conference was Bill Thompson from BBC, who provided a video speech and then virtually joined the event via skype for question and answers. The theme of his speech was “Broadcast Archives as Cultural Heritage: can the BBC engage as well as it informs, educates and entertains?”.

Last but now least, Karol Jan Borowiecki intervened in the conference as fourth keynote, with a lecture about “Personal relationships and the formation of cultural heritage: The case of music composers in history”.

After the lunch and the visit to the poster session of the conference, the afternon was conceived as a co-creation session, intended as an experimental activity aimed at demonstrating how the public can be creator (and so co-creator, together with the heritage professionals) as well as user of cultural contents. The co-creation session included participation of Janine Prins (Waag Society), Douwe-Sjoerd Boschma, Ilias Zian (National Museum of World Cultures, Leiden) and Emma Waslander (Stedelijk Museum, Amsterdam),  Hodan Warsame, Simone Zeefuik and Tirza Balk(collective Redmond Amsterdam) and Laura van Broekhoven (Stichting Rijksmuseum voor Volkenkunde, Leiden).

The conference ended with final conclusions and remarks, and the sense of having created a really interesting event: not only a milemarker for Riches project, but also a wealth of consideration and input around the theme of reducing the distance between people and culture. In this sense, the overall topic of these two-days was recalibrating the relationship between heritage professionals and heritage users in order to maximise cultural creativity and ensure that the whole European community can benefit from the social and economic potential of Cultural Heritage.